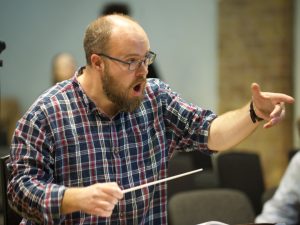 he past few months I have been undertaking a literature review of books focused on conducting and music direction of contemporary music. This has included: conducting related pedagogical textbooks/manuals; books by and interviews with leading conductors; texts dealing with more general issues in performing contemporary music; and doctoral dissertations on issues relating to conducting.

The focus of this work has been on the physical aspects of conducting focusing on the musical intention of different gestures and approaches. There are, of course, numerous other facets to conducting including, for example, rehearsal techniques, personal and professional interaction with performers and score preparation. These aspects, and many more, have been given much attention in the literature by scholars and practicing conductors alike. There is also an emerging field of ‘conducting studies’ in which scholars have explored and written about the practice of conducting in terms of music semiotics, gesture studies and from anthropological standpoints. Here, however, the concentration is on the physical gestures involved in conducting with a specific focus on contemporary music practice.

The original intention was to create a taxonomy of conducting gestures but it has become apparent that this is likely an impossible (and doomed) task as there are so many different viewpoints, conducting techniques and schools of thought when it comes to thinking about the physical gestures required of a conductor. Numerous scholars and conductors have underlined the inherent individuality of different conductors and that conducting ‘technique’ is fluid and hard to pin down to a series of specific gestures.

However, there are a number of key gestures, basic techniques and conventions that conductors are taught, or develop through practice, that allow them to communicate effectively (or not) with performers. The approach in this review, therefore, has been to try and summarise some of the different ideas and approaches of conducting technique as a starting place for thinking about what motions it might be useful to ‘capture’ in the Capturing the Contemporary Conductor project. This review is also helping me focus my ideas for writing a new piece for the session with live musicians and guest conductors in September 2017.