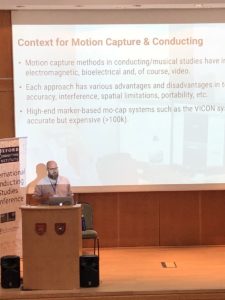 After months of planning and two days of setting up equipment, Capture Day finally took place on 27th September 2017. The team arrived early to make sure the systems were up and running ready for the conductors and ensemble.

Three conductors – our own Ben Oliver, Holly Mathieson  and Geoffrey Paterson were captured in turn, each having rehearsal time with the ensemble prior to giving two performances which were both captured.

Thanks to Vicon’s generosity in lending us additional cameras and devices for the capture system, as well as technical support to optimise the system, we managed to obtain high quality face, body and hand data from the conductors.

In addition to the Vicon motion data, we have video of the conductors and ensemble from 7 cameras (including a 360 degree video) in various locations, plus motion data from a Kinect 2, audio recording from stereo and close microphones and muscle data from four wireless EMG devices on the conductors’ biceps and triceps.

The day ran very smoothly, with help from Harry Matthews, Beth Walker and Sergiu Rusu (student and recent graduates) to help with unsticking and sticking markers amongst other activities!

We are deeply grateful to Bob Dimmock, Phil Bacon, Matt Oughton and everyone at Vicon for all their help and generosity in making this day a success. We’d also like to thank Geoff and Holly for being such willing guinea pigs, and also our ensemble, for their wonderful patience and playing: Anna Durance (oboe + electronics); Vicky Wright (bass clarinet); Julian Poore (trumpet); Joley Cragg (percussion); Liga Korne (electric piano); Aisha Orazbayeva (violin) and Dan Molloy (double bass).

Finally, of course our thanks to The British Academy and the Leverhulme Trust for their funding of the project.

I’ve just finished a new piece called Captured: Three Mo-Cap Experiments for conductor and small ensemble. This work will be rehearsed and recorded on 27 September n the motion-capture laboratory at the University of Southampton by seven professional musicians and three conductors (me, Geoffrey Paterson and Holly Mathieson). The piece is scored for seven players (oboe, bass clarinet, trumpet, electric piano, percussion, violin & double bass) and is in three movements (or experiments).

Each of the three experiments in this work are designed to challenge the conductors in different ways and facilitate understanding of how conductors work and the gestures they use to communicate effectively to performers.

For example in conducting Experiment 1: “Wonky Blues” some of the following elements will be need to be managed: asymmetric time signatures at different tempi; phrasing of sustained melodic ideas, sometimes in counterpoint; articulation and dynamic variation; syncopations; abrupt tempo changes; fermatas; tempo modulations (rit. & accel.); and cues. Whereas in Experiment 2: “Watch Out” the conductor has more of a controller/facilitator role, coordinating the ensemble through conducting flag notations and double arm gestures. The conductor in this second movement also has to negotiate conducting with a click track. In Experiment 3: “Three Rooms with the Same Wallpaper” the conductors will have to: understand an execute a range of metric modulations; deal with complex textures; manage homophonic texture coordination; conduct asymmetric time signatures at slow, medium and fast tempi; and shape lines.

I am certain each of the conductors will find their own way of managing the different challenges but that there will be shared techniques and approaches that will be seen across all three of us. It will be fascinating to explore the data after the capture day.

My compositional approach and preoccupations were certainly informed by the context in which Captured… will be used, i.e. in an experiment, and I’m excited to see how the piece works.